Lard Soap recipe with extra bubbles. Soap made with lard is affordable and nourishing to your skin. Lard is an easily accessible fat that makes a wonderful bar of soap! While lard is definitely an old-fashioned soap ingredient, this recipe has a bit of a modern take with coconut and castor oils for extra bubbles!

Some people get lard and tallow confused. The difference is actually very simple. Tallow comes from cattle, deer, or sheep whereas lard comes from pigs. Lard is actually rendered pig fat meaning it has been heated and purified to remove any impurities, it is softer than tallow and is considered a grease. Tallow is rendered leaf fat (fat around the internal organs and kidneys) from cattle. Once cooled from rendering it is a very solid and hard fat.

Learn how to render tallow here. You can follow the same process for rendering lard.

Using lard in soap is an age-old practice. Our grandmothers and great-grandmothers made soap with lard for the sake of convenience and availability. We can use this ingredient for the same reasons. Lard can be considered a sustainable by-product.

Lard is cheaper to source than palm oil and likely more widely available. When you use lard you are ensuring that what may be considered waste from the animal is actually used. If you are a homesteader who raises your own meat, you know the sense of honor that you feel for the animal. Most of us desire to use as much of the animal as we can, waste seems irreverent and practically sinful.

Benefits of Making Soap with Lard

Lard is moisturizing and nourishing to human skin. It is a mild cleanser that is highly compatible with the structure of our skin cells with a similar pH as well. Oil dissolves oil which means lard soap can actually be good for cleansing your face. It won’t clog pores or damage your skin.

Lard is also widely available and affordable, bringing the cost of soap making down considerably!

Set up your area and prepare your mold. Clear away anything not related to soap making. Gather everything you will need. Get your immersion blender, your scale, gloves, goggles, and your rubber spatula, bowl, and an extra spoon.

Set out all of the ingredients. You may find it helpful to measure all of the oils and put them in a bowl then put the containers away, just to keep your workspace clear.

I like to put down some cardboard or thick newspaper to protect my counter. I have a butcher block island top and I have burn marks from where I have dripped lye. Plus your spoon from mixing the oils will make a mess too.

In a medium saucepan, melt the fats and oils together. Once melted, set aside to cool.

As the fats are melting, measure your water and sodium hydroxide in separate containers using a digital scale. After measured, slowly pour the sodium hydroxide over the water and gently stir. Set this aside to cool in a safe place.

Mix the Lye and Melted Fats

Next, once the lye and the melted fats are cooled to around 115 degrees, or at least within ten degrees of each other and 120 or below, mix the two together. You will do this by slowly pouring the lye into the melted fats, and mix together using an immersion blender.

You should mix with the blender until you reach a thin trace, then add any fragrance oils or colorants that you desire. Mix a bit more and then pour into your mold.

To Gel or Not to Gel?

Next, once the soap is in the mold you can cover it and set it aside for 24 hours. There is a personal preference in soap making regarding whether you should allow or force a soap to go through what is called the gel phase. From my experience gel phase is only necessary for making the color of your soap more vivid. If you are adding color to your soap then forcing your soap to go through the gel phase may be desirable. To do this, you would either wrap your mold in bath towels to insulate and keep the temperature up, or you could put it in the oven at a low setting like 120 degrees.

I think this is a great post on the gel phase.

Personally, I rarely add color to my soap so I do not force or even allow my soap to go through the gel phase. I have had my soap get too hot and crack and I just do not see the benefit. It is absolutely not necessary for making soap. When I make soap with milk, I put the mold directly in the freezer to keep it from overheating and burning. You can do the same with any soap recipe, or you can simply cover it with parchment paper and set it aside on your counter to cool for 25 hours.

Cutting and Curing Your Lard Soap

Lastly, after 24 hours your soap should be hard enough to remove from the mold and cut. Once cut, you simply place the bars of soap on a rack or cookie sheet lined with parchment to cure.

Lard soap is fully cured at 3-4 weeks. Some people say you can use it after 10 days. That again is a personal preference. The longer it cures, the harder the bar will be and the longer it should last as more of the water will have evaporated out of it.

Either way, the bars should be turned from time to time to ensure they dry completely. Airflow around the bars is important. 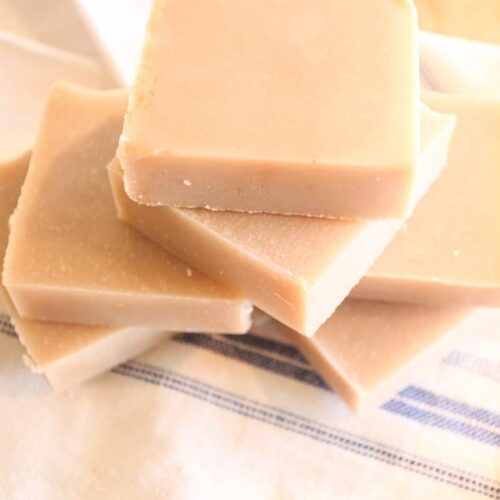 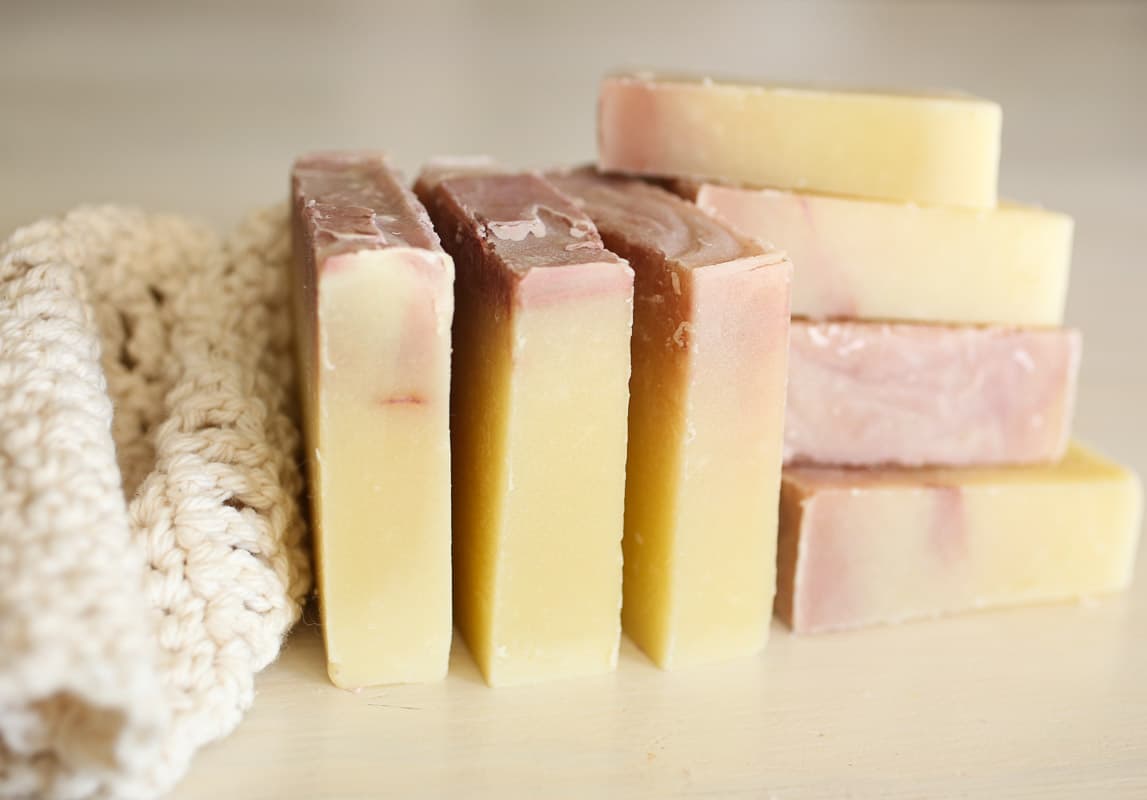 Mango and Shea butter soap is luxurious and nourishing. This soap is a smooth hard bar that makes your skin feel supple and soft! This post contains affiliate links My Favorite Hobby As a result of the #handmadehomechallenge, I have a new favorite hobby! A couple of years ago I decided to learn a new… 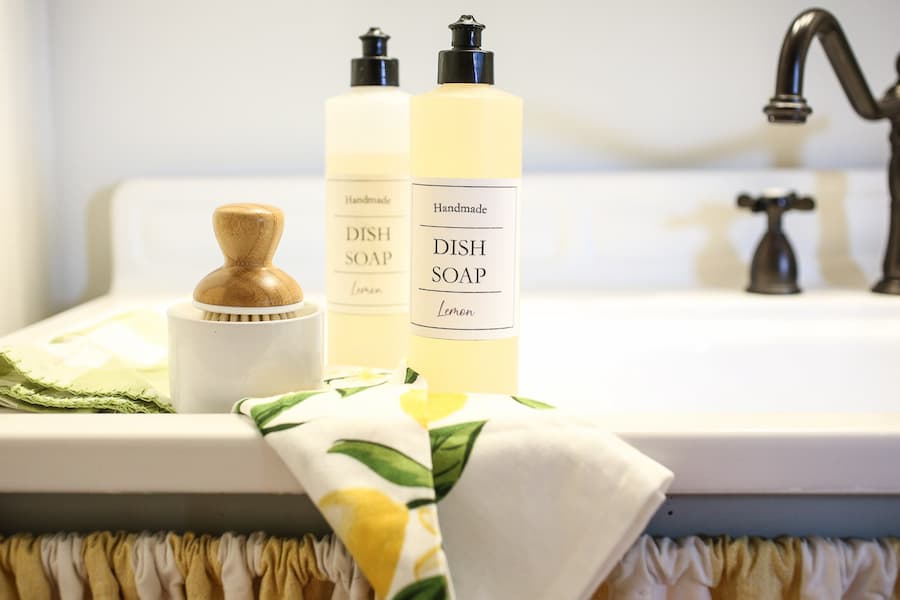 This homemade liquid dish soap recipe makes a legitimate real liquid dish soap. This hot-process liquid soap will please you with its simple and straightforward instructions and ingredients! Just four ingredients and you are ready to make soap! There is a video below if that interests you! This post contains affiliate links Why Make Your…